I met Alison a few weeks ago when she contacted me after reading my blog and seeing the interview with Professor Rea. She wanted to get in touch to let me know what she thought of the interview but also to inform me that she'd shared it with others on various groups. We ended up meeting after that as Alison also lives in Leicestershire where I'm from. It was great to meet a fellow sufferer locally and really interesting to hear how the Vestibulopathy and her BPPV has affected her. 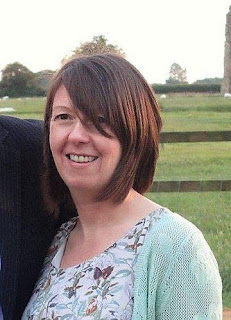 " My ‘dizzy’ journey started out like so many others, with a virus, back in 2004.  It was mild and I recovered with the help of physiotherapy exercises. It reared its ugly head every now and then, when I was run-down or tired, but rest and more physio sorted it out without too much trouble.  From 2006 I started to feel ‘off’ more and more and whilst driving on the motorway to Ikea one Sunday morning I had a bad dizzy spell. After continuing to experience new symptoms I was diagnosed with BPPV.  I had an Epley manoeuvre,  an amazing treatment where all you need is a couch and the tiny crystals causing a disproportion amount of trouble, were moved to a place they couldn’t do so much damage.  I was unfortunately one of the people who has persistent and recurrent BPPV and over the following 2 years I did countless epleys, only managing brief periods of remission. Benign it may be but added to vestibulopathy from the initial virus plus visual preference, it caused me significant symptoms.  I was becoming increasingly anxious, dizzy and housebound and basically desperate and finally agreed with my Consultant that I had reached the point where an operation was the next step. So I had my posterior semi-circular canal plugged.  It went well but I found the recovery really tough. Every tiny movement caused severe rocking but after 6 weeks I was mobile again. But no BPPV and I was hopeful for the future.

The following year, when 4 months pregnant, I woke to severe room spinning.  I was so upset and I needed a revision operation. The rest of my pregnancy and early months of my son’s life were difficult, I even had to manage an epley the day after having a c-section due to the awful dizziness.  Anyway, when he was 5 months I had the revision surgery.  Recovery went better initially but BBPV on my good ear, probably caused by the drilling from the operation, made for the 2nd worse day of my life.  I could hardly walk into the Consultant’s office but after a horrific epley, could walk out unaided.

That second op was nearly 7 years ago, BPPV was still part of my life unfortunately, but thanks to the operation the crystals couldn’t get into their favourite and most troublesome hangout.  So, I got used to the ups and downs and limitations of having a dodgy vestibular system. But I managed to work part-time, went on holiday, went on planes, got out and about a bit, had bad days but good days too.  It was my new life, not one I would have chosen, but I accepted it and got on with it.


Now to the worst day of my life. On 5th April last year, 30 mins into a flight to Barcelona with my husband and son, I heard a bang in my ear and then the most violent and unexpected vertigo. I span out of control, feeling like I was rolling over and over down an endless hill. I screamed. It was incredibly scary and I didn’t know when it was going to stop.  It lasted probably a minute or so but felt like a lot longer, then hit again.  When it stopped I had awful vertigo, only being able to open my eyes for a few seconds at a time.  I began vomiting and this was it for the rest of the 2 hour flight. My heart broke for my 6 year old son sitting 2 seats away.  I was ambulanced off the plane and under advice went to the hotel where I hoped I would wake up feeling better the next day even though when I opened my eyes the room tilted and span.  I could barely make it to the bathroom. I got home, I still don’t know how I managed that, experiencing the same bang and vertigo, though not as bad 30 mins into the flight. I had another set of balance tests once back and the results were ‘dramatic’.  It has taken a year to recover and am finally feeling like I can get back to the normal dizzy me (never thought I’d be hoping for that!).  My Consultant can’t say for sure what happened on the plane, there are a few theories but it’s left me with a few new symptoms including hearing loss and tinnitus.  I cling on to the fact that it’s not happened again and am more than happy to follow the advice to avoid parachuting and scuba diving!"


We met in a busy coffee shop or tea rooms should I say, one that neither of us had been to before and it was slightly overwhelming with the number of people and noise. (Note to self) choose somewhere quieter next time! We both talked about the anxiety and stress having a condition like this can cause - yet we both were able to laugh about the coping mechanisms we both use....Alison has to have her chewing gum and I have to take my bottle water of water with me wherever I go! It's our security blanket if you like! They somehow makes us feel better. I wonder if it's just us or are there others out there who have a security blanket too?